One week after the biggest snowstorm on record, and there’s still a lot of snow out there (big surprise). The temperatures have been pretty warm, so the good news is it’s been melting off of the roads. Many of the two-lane roads were reduced to one and a quarter lanes earlier last week because of so much snow on the sides of the road. The huge snow piles are also shrinking out of the parking lots. 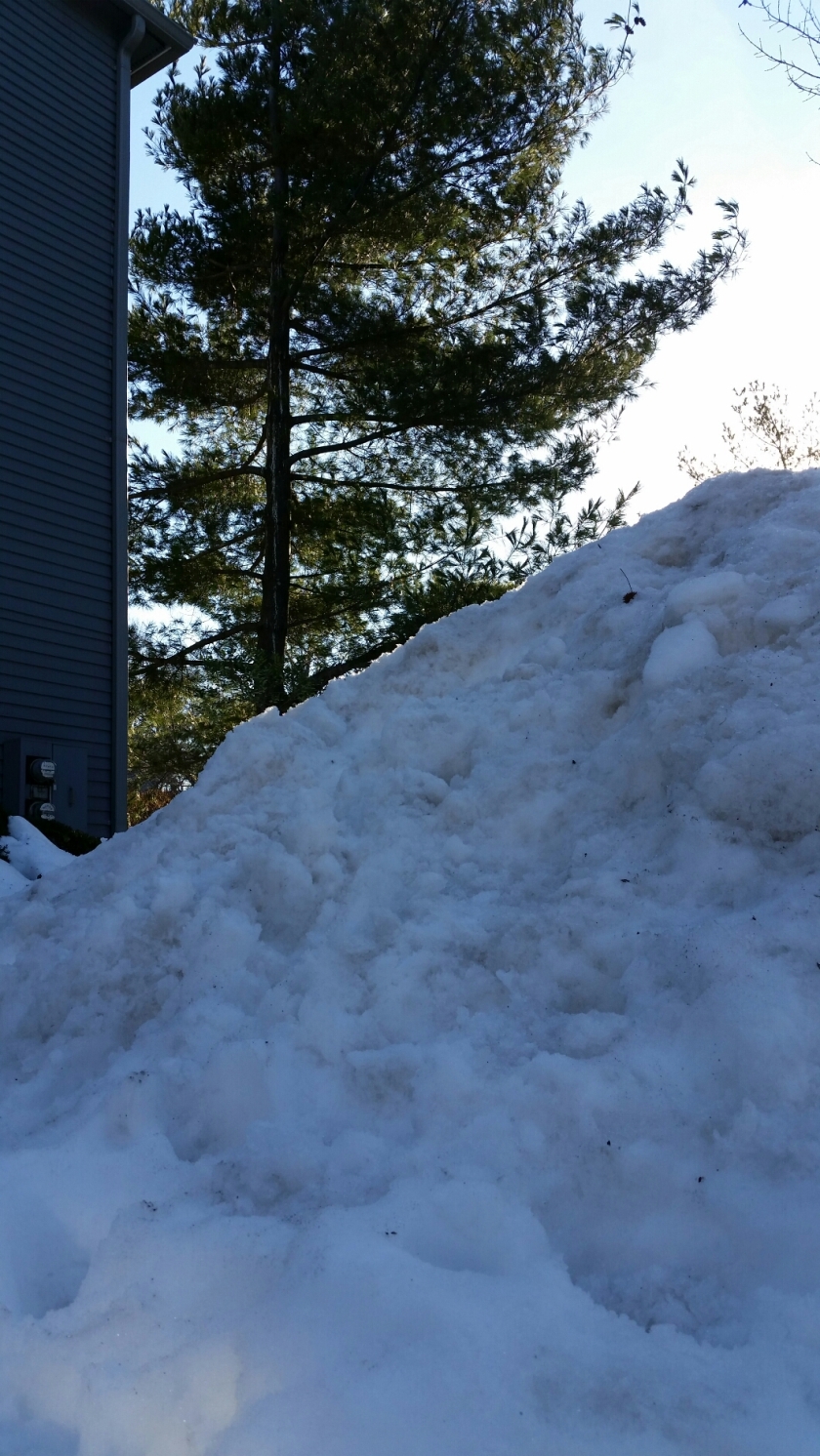 Today was 55° and sunny, and the remaining snow mountains at home were still fun to climb up, slide down, and dig through.

A set of red glassware in an antique shop, looking beautiful in the sunlight.

In response to the photo challenge called Vibrant. 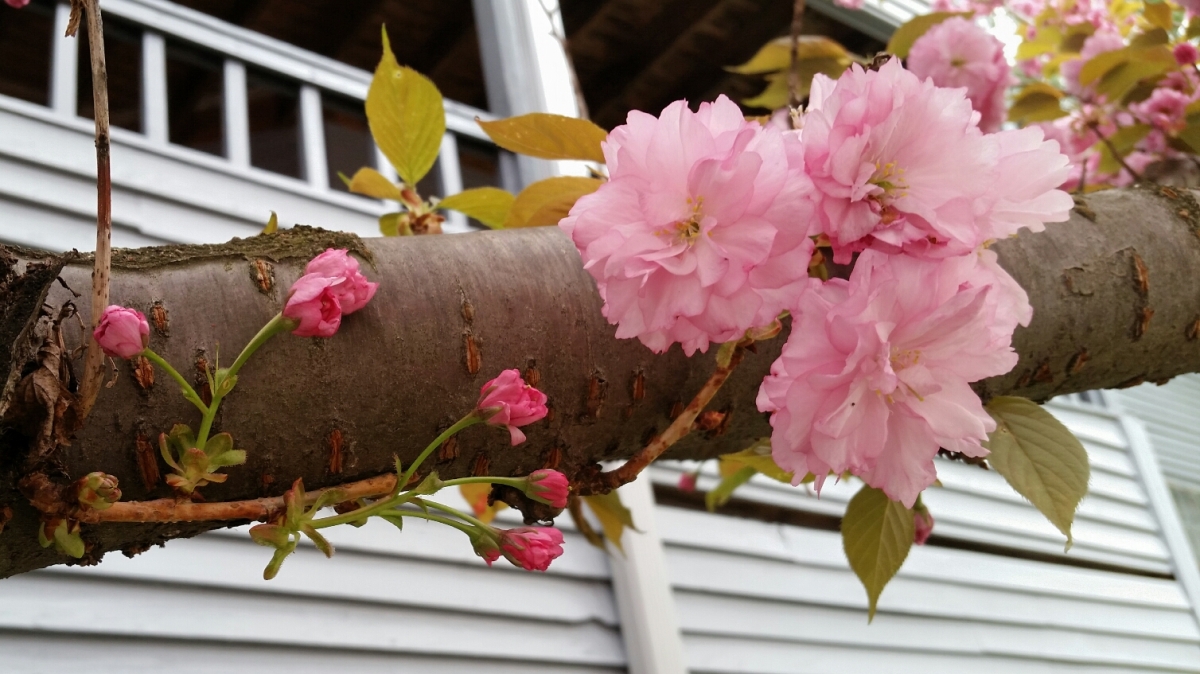 For Cee’s photo challenge of pink or magenta flowers, here are some of mine. I saw these pink mums this fall and it was the first time I had seen them in this shade of pink.

A similar thing happened recently with these hyacinths. I had never seen them in this pale pink before and I didn’t know they grew in a long-stemmed variety.

A third recent discovery of mine is that the hydrangea bush (that’s been outside all the years I’ve been living here) turns pink in the fall. I had never noticed.

But I always notice the cherry blossoms in spring.

Sometimes you need to get a flower fix at the grocery store. 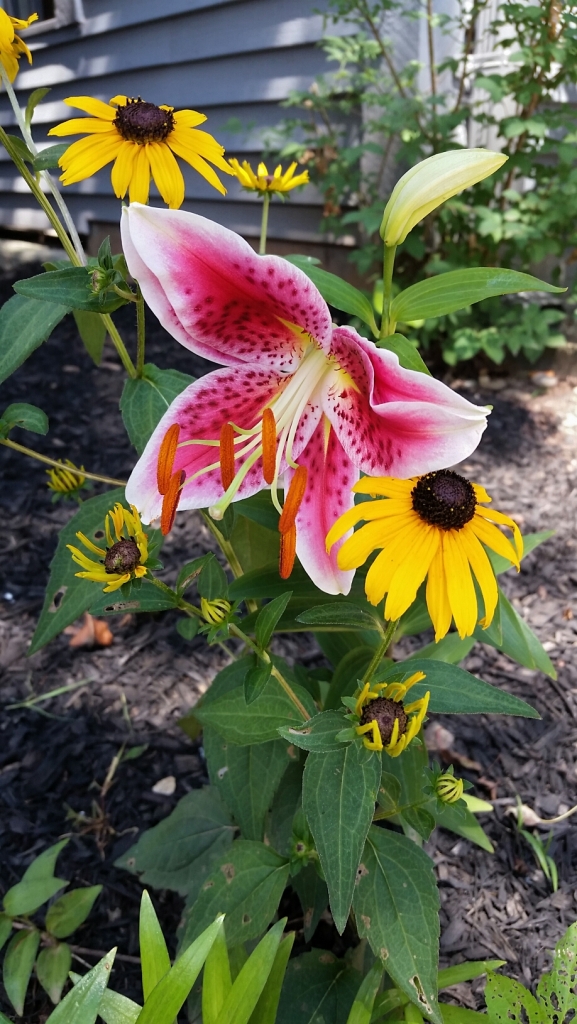 And sometimes they are growing right outside your door.

Sometimes they are bleeding hearts 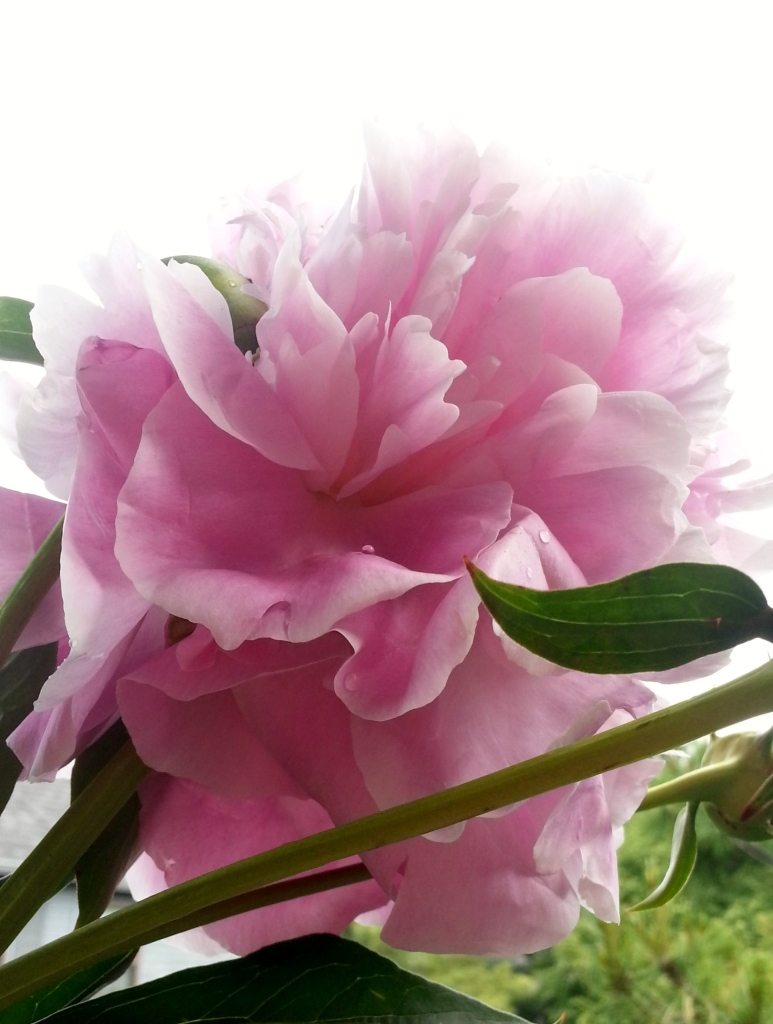 …sometimes they are peonies. 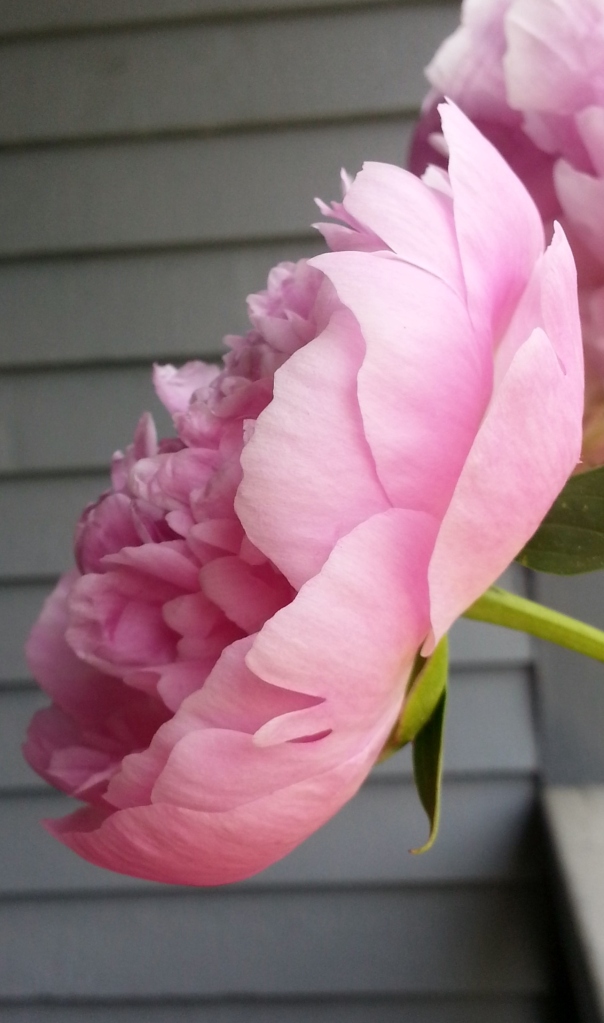 Growing up, I remember constantly hearing ads for the lotto saying, “All you need is a dollar and a dream.” Today, a Powerball ticket costs $2, but who’s counting.

(Technically, that slogan was for the New York lottery, but here in New Jersey, we get all of NYC’s radio and TV channels.)

In response to this week’s theme: Optimistic.

**Below I have reposted something I wrote last April about zebra stripes, in light of a new study that concluded the stripes are not used for camouflage. It seems I did a similar experiment last spring 🙂 So what are they for? Read on for more hypotheses.

I’ve been thinking about zebras lately (maybe because there’s a picture of one on my kitchen calendar haha) and the camouflage they have. Human eyes can easily spot the black and white against the green or dried yellow grass, but I assumed that their predators’ eyes work differently. I conducted a little experiment to photograph a toy zebra in the grass and then apply different post-processing effects to mimic what a lion might see.

I was under the impression that cats saw in yellow tones, but I didn’t find any evidence to back that up. I saw a page on livescience that said feline eyes see mostly blues and grays.

I found more information about lion eyes, which are generally color blind according to an article on howstuffworks, but looking further into the topic of zebra stripes only revealed more questions. As it turns out, scientists are not in agreement about what the stripes are actually for.

Some experts believe the stripes are for camouflage, the stripes and wave pattern helping zebras to blend in with their grassy environment. This could benefit a single zebra, and also could help a group of them because all the different stripe patterns standing near each other would make it difficult for a predator to distinguish an individual from the group, according to howstuffworks. I’m also amazed at the fact that each zebra has a unique stripe pattern, similar to our fingerprints.

Other animal scientists believe that the stripes have nothing to do with camouflage, and instead serve as a defense mechanism from disease-carrying tsetse flies. According to another article on livescience, it could be that the flies will have trouble landing on a zebra because the flies can’t see striped surfaces.

The article presents a third theory of zebra stripes, which is that the alternating black and white pattern somehow acts as a cooling system for the zebras, which spend more time out in the hot sun eating than other animals because their digestive systems are inefficient.

This article was published a few months ago and presents the leading theories and criticisms of why zebras have their stripes. It’s interesting that scientists have not come to a conclusion about this, and that it is an area of ongoing research.

Whew, who knew that some fact-checking on lion eyes would lead to such a mystery. I had always assumed that zebra stripes were camouflage, but, well, you know what they say about assuming….

The world is a fascinating place with something new to discover around every corner. Today marks the end of the A to Z Challenge. It’s been fun, and I’ve learned a lot. I hope you have, too.

The snow removal crew cut a path this morning. The news said our area got 27″ of snow. That felt about right!

Interesting how the wall of snow is taller on the right. You could also tell when walking–it was deeper in some spots. This is because of the high winds creating snow drifts. It depends on which way the wind blows, and around which obstacles. You could also tell with the cars in the parking lot. Some had more snow than others (mine was almost completely covered!)

The sun was bright and the wind was gone, so shoveling out the cars wasn’t too bad.

This huge pile was made by the plow. They push the snow up into the grass and out of the lot.

I have never seen so much snow deposited from one storm. This usually doesn’t happen here. We’ll usually get several storms, sometimes even one per week, with a few inches here and there. Sometimes the snow will pile this high if we have several big storms in a row, but very rarely getting this all in one shot.

To make it even more strange, this is the first major snow of the winter. We’ve gotten flurries twice this month. So to go from 0 to 27 inches in a day is a pretty dramatic change!

For more views of the snow, check out my post about my walk through the blizzard yesterday evening.

From inside you can see the snow blowing in the wind, but you can’t fully appreciate it until you step out into the blizzard.

With my camera tucked safely in a plastic bag, I took a walk in the afternoon. Or, I should say that I took a trudge through the snow. It came halfway up my shin with some steps, with others it was up past my knees. I wanted to walk to the corner, but the wind was blowing icy snowflakes in my face so I skipped it.

I have taken pictures of this gazebo in spring and in fall. 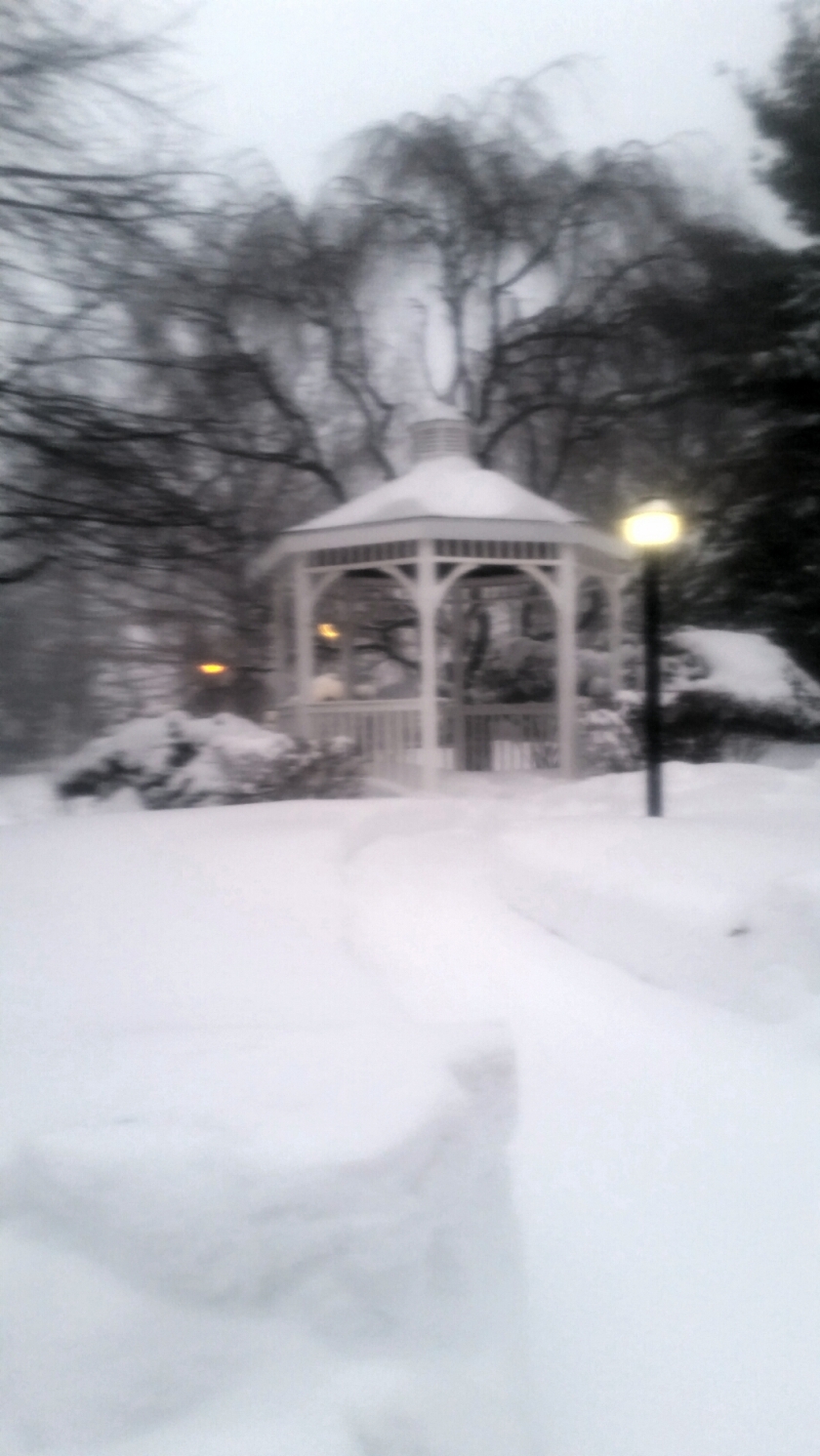 An icicle hanging off of the gazebo light

As evening came, the light started to look blue.

This tree looks like a giant bird about to snatch me up. Probably wasn’t the smartest move to stand under it….

A row of cars covered in snow

A row of trees in the snow

With the wind whipping the snow into drifts, it’s difficult to know how much we got. I think it’s safe to say about a foot.

Here’s the best part about going out in the snow: coming inside and warming up! 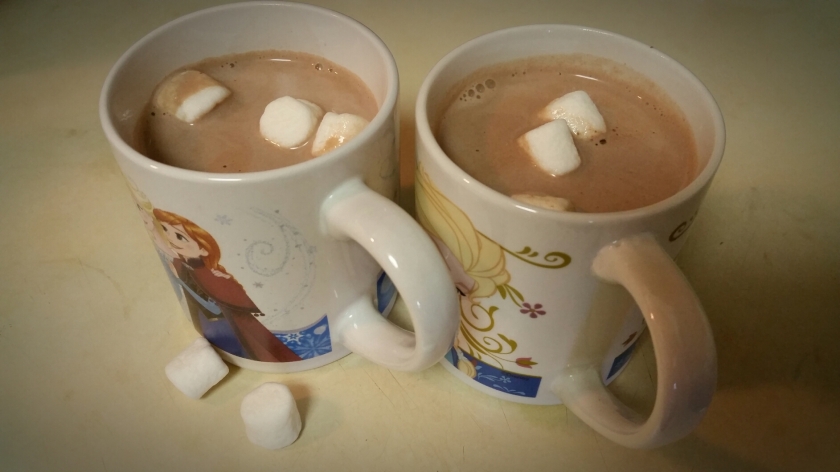 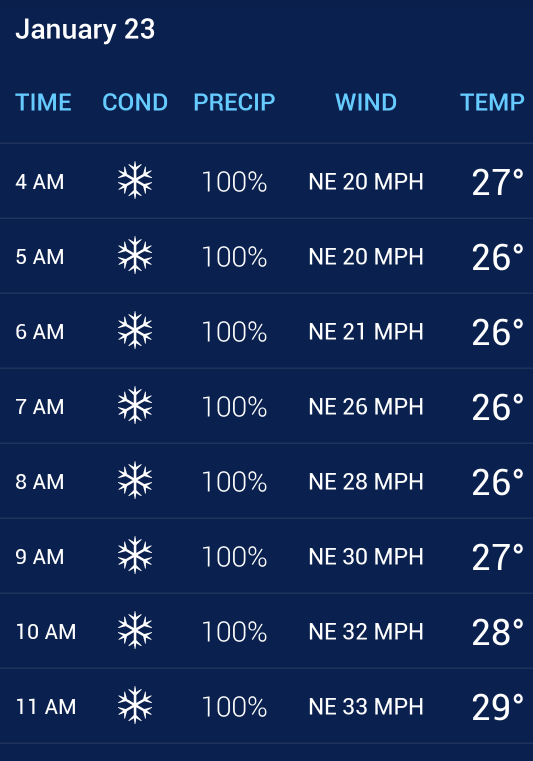 We’ve gone from no snowstorms yet this winter to a blizzard. Like an actual blizzard warning from Friday night to Sunday morning. Way to bring it!

I’m excited now, but I also feel that the power could go out at any second. Then the party’s over, and I will be furious with the snow.

But for now, it’s enchanting.

Time to get the kids mittened up and go play. I don’t think we’ll last long out there. It’s extremely windy, that must be what they mean by “blizzard.”

For Cee’s photo challenge of blue and purple flowers, here are some from the archives. Pansies from the early spring.

A morning glory plant that was a Mother’s Day gift that bloomed in July.

And finally, some lilacs that I had close to Mother’s Day. 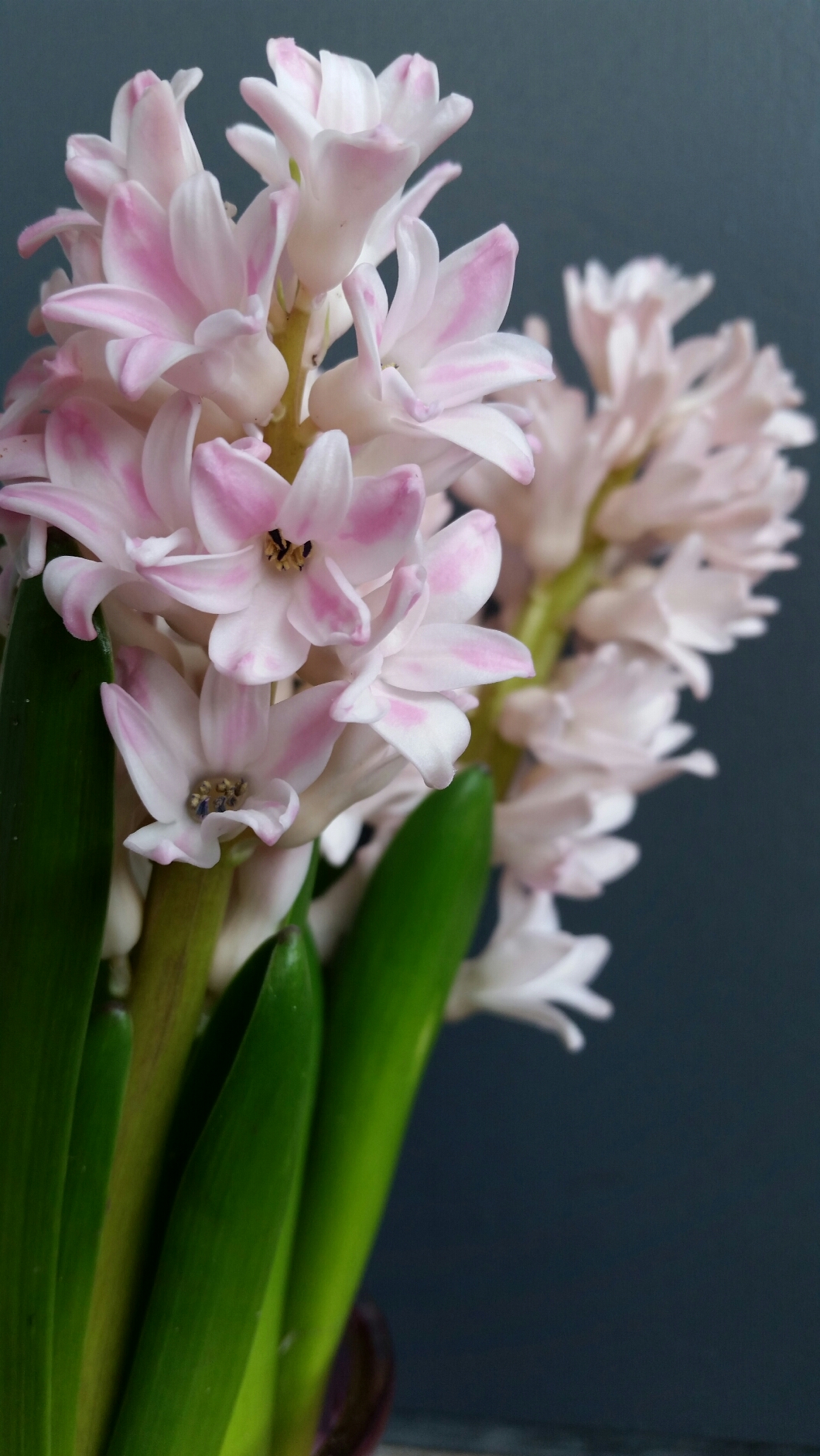 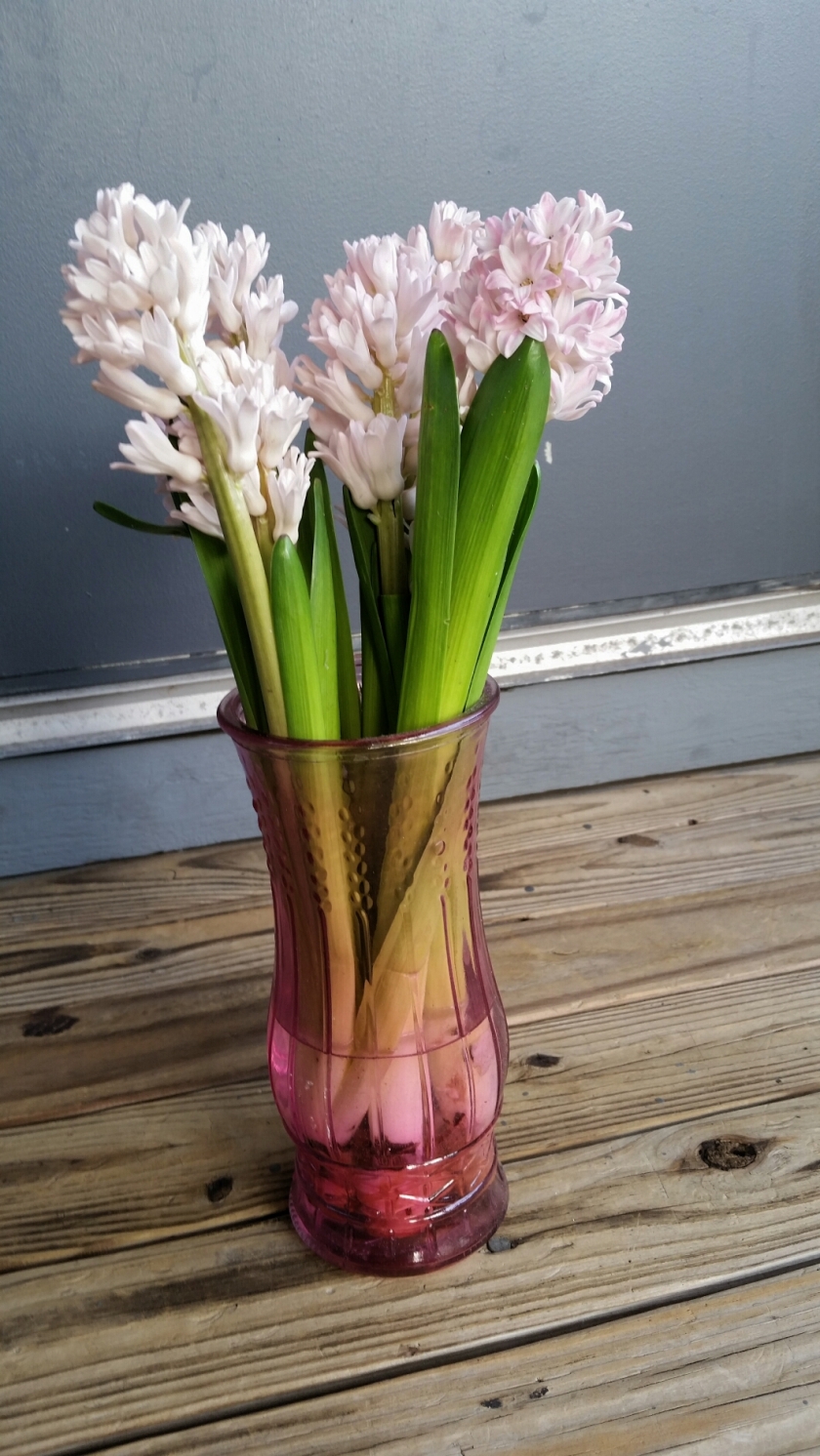 I’ve never seen hyacinths this tall. Usually they are sold in pots around Easter and they are about 6-8 inches high. This is the first time I’ve seen them sold as cut flowers.

It took me all day to realize this, but usually at Easter you get a pot with one, maybe two stalks of blooms–this has 5 and that’s why the scent is so strong! Throughout the day, I thought these seemed extra fragrant, haha. Within minutes of getting home from work, my husband started commenting on their aromatic fortitude, and I thought to myself, “I’ve gotten these before, what’s the big deal?” Oh, right, I usually don’t have this many hyacinths packed into our small apartment.

Well, anyway, I think their fragrance is dreamy. So’s the color–I’ve never seen such a pale pink. I’m in love.